Don’t be afraid to say no 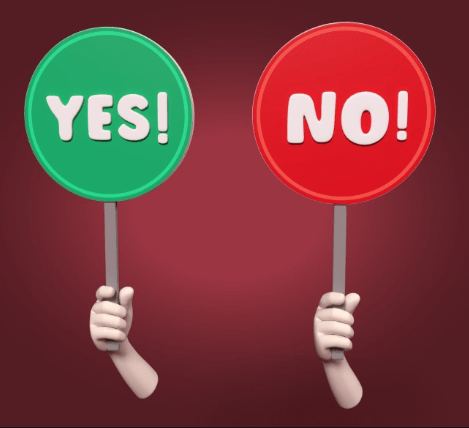 Saying yes can often be one of the easiest answers to a question that comes our way. However saying no, now that’s a whole other story.  No comes with fear, worry, and so much more.  But why?  And can saying no actually be saying yes at times?

First, many of us naturally like to be everything to everyone.  By saying no we are striking exactly against that goal.  We are showing people that for whatever reason we aren’t the go-to person for EVERYTHING.   (Personally, I think this can be a very good thing for our well-being).

We also worry that if we say no to this that people may not come to us anymore for help, whether it be work projects or personal favors.  It feels good to be needed.  We don’t want to ruin that by saying no to one request.

In addition, we often don’t want people to think we aren’t capable of what’s being asked of us.  When in fact, we may very well be more than capable but for our own personal reasons just feel the need to decline the offer.  However, we worry what it may do to our reputation.

This is just the tip of the iceberg.   Two simple letters N-O can spell out a lot more to people then we intend.  But why?  Do we care?

Well first, it quite often does mean more to people than simply no.  For whatever reason, when we say no people often read more into that answer then is intended.  So, there’s that.   So, the next question becomes do we care?  Does it hurt me to say no?

I think this comes down to the situation at hand.  If we are new to a job perhaps saying yes, despite wanting to say no is the best answer for building our reputation.  However, if we are a tenured employee with an established reputation, perhaps saying no for whatever reason may mean nothing at all.

It also has a lot to do with our own well-being and knowing what we can take on and can’t at a given moment.  It’s important to take care of ourselves at all times and not take on more than we can reasonably handle or we may find ourselves in a highly stressful situation.  Not that stress can’t be a good thing, but too much can be harmful.  I’m a big fan of self-care and I think this is where that comes into play.  Saying no to something that isn’t good for us can be a YES to ourselves.  It can also be a YES to something else that we are prioritizing above the first request.

So next time someone asks you to do something, don’t hesitate to carefully weigh your options.   Identify what the cost of your answer will be in the moment and long-term.  Are any fears of saying no valid?   Is saying no really saying yes to something greater?

All great questions to the next time someone says to you, “hey, can I ask you a favor?”

Speaking of favors, here’s a favor I can pass along to you – the opportunity for some great deals!