How online gaming changed my life… 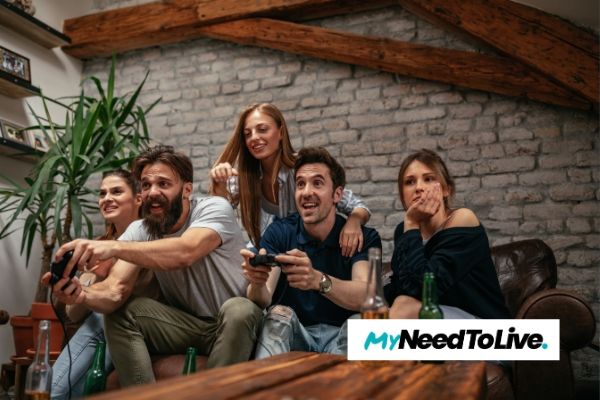 When you think of your typical gamer, you may think of a guy sat in his bedroom, eating Doritos in his own little world, who might be socially inept, prefers the darkness of a blackened-out room with only the pixels of a monitor or TV lighting the way. But from my experience, this is just not true… Most of the time. So, how did online gaming change my life?

My earliest gaming memories as a child was sitting on the floor in front of the tv at my grandparents’ house with my Sega MegaDrive, playing Sonic 3 (it’s still the best Sonic game out there, don’t even try and argue against it… Except maybe Sonic 3 and the Knuckles, but anyway…). Me and my cousins would spend hours playing it together, taking turns or grabbing the second controller to play as Tails.

I pretty much owned every console, and right now I’m happy with my Xbox One S (Back off you PS4 enthusiasts… I just prefer the controller; I don’t care which is faster or has the better graphics so don’t go come complaining at me!) My Journey of online gaming started about 10 years ago when I started University, a lot of my friends had an Xbox 360 and played together, so I decided to get one and join in.

We played games like Call of Duty Word at War and Black Ops, Fifa (Which I am NOT good at, in fact I think I borderline absolute trash!) and Halo online together. We would spend far too many hours playing together, but it really did help me to make new friends during a stressful and scary time in my life. I was quite the home bird, so moving away for me was terrifying, so it was such a relief that I found a group of people that were into something I was in to, and they didn’t judge me for it!

Growing up I was labelled an ‘e-girl’ which I hated! They often assumed I was terrible at games or that I was just pretending to like them for attention; which thinking back is actually ridiculous!

Anyway, growing up I was extremely shy and timid, I had a lot of anxiety and would often avoid talking to people, and the people I was close to didn’t game so I never really got to play as much as I would have liked.

I used to have pretty low self-esteem, thinking I was no good at anything. When I was told I was actually good at something, I found it hard to accept, but being told I was good and seeing the results after an online match of Call of Duty or Battlefield really gave me a huge boost, I started to believe that I was good at something. This new belief in myself started to come through to my real life where I would want to try new things, I started to become braver, and was able to push myself to do better.

Ok… So… I’m not going to sit here and lie and say I’m the best gamer in the world… (Move over Shroud, ya girl’s here to take over!) because I’m far from it, I know a lot of people better than me, but I’m not bad, I can hold my own and get myself the odd chicken dinner.

As I got more and more confident in my gaming ability, I found myself getting more confident with communicating with others in a party and it soon started reflecting in my real life. I found it easier to talk to people and make friends, and I also found a lot more people were into gaming than I thought, up until my first year in uni, gaming was a bit of a secret of mine.

I met so many great people playing online, some of who I can honestly say are some of my closest and best friends. I know so much about them and they know everything about me; they’ve really helped me through a lot. It’s funny to think I call these people my best friends, yet they live hundreds of miles away and I don’t even call them by their real names, the look on everyone’s face when I mention my good friend ZebZeephus from Georgia, USA, who I met playing PUBG and Overwatch on Xbox, has given me some of the best life advice, calming my nerves before an interview for a job I REALLY wanted (and got by the way *cheers*). I’ve had such a laugh with LavishHorse16 from Louisiana, who played with me and kept me awake during my Macmillan 24-hour charity gaming stream. Then there’s Joshuajean, who I adore and has really helped me through some difficult life choices, while also teaching me the ways of Rocket League and shaping me into the ultimate sniper on PUBG.

Of course, you should be careful who you talk to online and parents should take the necessary steps to make sure their children and family are safe. I’ve had my fair share of oddballs and toxic players sending me abuse, but I find the best way to deal with these people are to report and block them.

But overall, my online gaming experience has been amazing; I’ve met great people and have had so much fun. I’ve learnt so much about myself, I can do anything I put my mind to, I’m braver than I was, smarter, and over all my everyday life is better, and a huge reason for these changes, is online gaming.

What are your thoughts on online gaming? Let me know in the comments below!