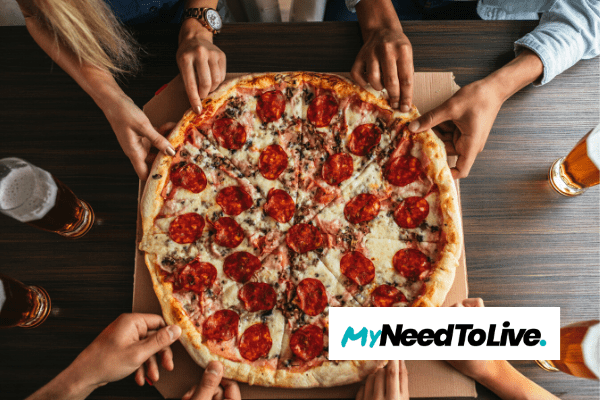 It’s November. The rents been taken out. The overdraft has been well and truly broken into, so Dominos Fridays are no longer a thing. What a sad, sad sentence. I will not however be deprived of my cheesy pizza and, as if I wasn’t procrastinating enough already, I decided there would be no better way to spend a Friday night than making my own with my pals.

We popped down to Tesco bought some bases [no way was I putting dough on the tabletops of our uni kitchen], some tomato sauce, a ball of mozzarella [does anyone else find raw mozzarella VILE, why is it that slimy!? ew ew ew] and some weird selection of vegetables and fake cheese for Anna [vegan]. All the ingredients cost about £1.80 per pizza. Get home, chuck it all together and into the oven for 14 minutes at 200 and BOOM your perfect lil pizza!! A perfect little pizza you don’t have to run outside in the cold, in your pjs to collect from some guy a in a car, result.

Being friends with Anna for over a year now I’d managed to avoid her cooking me a meal [I’m a carnivore, soz] but caved the other week when she offered to make a dessert that she promised I would love.

Pulling her protein powder and massive bag of oats out of her bag, I was skeptical. However, I’ve gotta give it to her- her mug cakes are a thing of beauty.

Shove it all in a mug and pop in the microwave for 1 minute [don’t go over- there was a slight explosion when I attempted to re-create them on my own, once again big sorry to the microwave and flat for that one]

Personally I’d still prefer to devour a shit-load of biscuits with a cuppa but seen as i’m committed to this health lifestyle now [ugh] it’s a fab little substitute that doesn’t leave you feeling guilty after. So the Vegan won this one- but, I’m still not going to cave. I am enjoying your attempts though Anna, fair play.

Our Friday foodie night is becoming a weekly occasion and perhaps THE highlight of my week. So lovely to finish the week, relaxing, catching up, venting, singing, dancing, telling jokes and eating in your pjs with your pals.