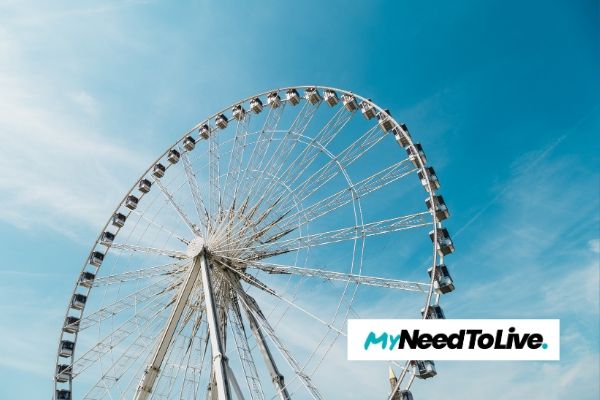 As it’s Halloween, I thought today I’d share with you a few experiences of where I faced up to some of my fears. Both of my fears I’m going to talk about today are related to my vomit phobia, but through persuasion and if we’re honest, a bit of FOMO, I’ve managed to come face to face with them. Facing your fears can be scary AF, but the feeling of accomplishment after you’ve done it is amazing and you end up feeling pretty pleased with yourself! Here’s a couple of times that I’ve faced my fear of flying, and my fear of rollercoasters.

Getting on a Plane

I’ve been scared to fly ever since I can remember. My emetophobia meant that the main thing that put me off flying was the fear that someone near me would be sick. The irony of that was, if I had a pound for the amount of times I’d been told “I’ve NEVER seen anyone be sick on a plane,” I’d have enough to afford therapy so good that it would oust the emetophobia completely.

It wasn’t just that though, my mind was filled with scenarios of plane crashes. While I’d been told many a time that you’re safer in the air than in a car, the only time I’d really seen anything to do with flying on TV and in the movies was in the form of disasters, so I found it harder and harder to believe that statistic.

I’m not sure what it was that caused me to let down my guard. I just remember my husband and I discussing the possibility of a holiday and the fact that if we wanted some decent weather, we’d have a better chance if we went abroad. Before I knew it, we had a 4 day trip booked to Barcelona.

Boarding that plane was one of the scariest things I’ve ever done. I had never been so scared in all my life. I had no idea what to expect when it came to taking off – I purposely refrained from doing any research because I knew I’d find something that would spike my anxiety. I remember crying my eyes out as we taxi’d, and my heart almost pounded out of my chest as we took off. But I did it. I cried a bit more when we were in the air out of sheer disbelief that I’d finally done it. It was a 2 hour flight and with the help of a carefully picked anxiety playlist, it went fairly quickly. The relief and the pride I felt when that plane touched down was incredible. I’d finally endured my first plane journey!

Turbulence and the Worst Case Scenario

I considered including this under the ‘flying’ category, but given the fact that these were two scary-ass experiences that were on par with the flying thing, I thought I’d keep them separate. Two of my flying related fears came true.

The first one was on the flight home from Barcelona. After a nice, smooth flight there, we had the exact opposite on the way home. Because of the weather we were delayed by over an hour, and during take off the pilot told us that because we were taking off during a thunderstorm we were going to experience some turbulence. I panicked and looked at my husband who told me “we had a bit of turbulence on the way and you barely felt it.” Long story short, I thought that plane was going down. For a good ten minutes I genuinely thought I was going to die.

In case you’re reading this thinking that I’m a drama queen, I’ll give you a little context. My husband has flown many times in the past – pretty much since he was a child. He later told me that the turbulence on this particular flight was the worst turbulence he had ever experienced.

Thankfully, the turbulence was over pretty quickly, although the rest of the flight was spent in a ridiculously high state of anxiety with A LOT of crying. When we finally got off the plane I asked my husband whether or not there was mascara down my face as we were leaving the airport…he said there was. That’s right, I  had gone through passport control and baggage claim with two big black streaks down my face.

The ‘worst case scenario’ happened earlier this year on a flight to Madeira. The elderly man next to us had some sort of funny turn and started coughing, and then he went white as a sheet. The cabin crew came to tend to him and after getting him some water he seemed a little bit better. I put my headphones in to calm myself during take off, but the second we were in the air, out came the sick bag. My headphones were not enough to drown out the sounds – but it was pointless having them in anyway as despite looking clearly distressed, I was asked to remove them by the cabin crew. They took the man to the toilet and gave him some oxygen, and thankfully they let us move seats. My husband to this day tells me that he wasn’t actually sick, he was just coughing and retching apparently. Even so, I was terrified, and it didn’t help when, 10 minutes after we’d moved, they sat a lady into the empty seat next to us. What was she clutching? A goddamn sick bag. Thankfully she didn’t use it, but that 4 hour flight was the longest one of my life and I spent the first day of my holiday in a bit of a state.
You can read the full story here.

Getting on a Rollercoaster

Again, my emetophobia meant that rollercoasters were out of the question. It wasn’t so much the fear of them crashing or breaking down, it was more the fact I’d be sat near a kid who had indulged too much in the fairground food and ignored their Mum’s advice to not get on the rollercoaster just yet. That being said, when I was invited on a trip to Thorpe Park with some of my work friends that I hadn’t long gotten in with, I still agreed to go. Like an idiot, my plan was to pay nearly fifty quid to be the person that looked after the bags all day.

It wasn’t until we parked up at Thorpe Park that I confessed that I’d never been on a rollercoaster. My friends were not only confused as to why I’d come, but also they found it rather funny. I don’t particularly know what it was that convinced me to get on Colossus, maybe the reality that I’d spent a lot of money on this day trip hit me too hard, or maybe I just didn’t want to be left out. Either way, before I knew it, I was in the queue.

In hindsight, a ten loop rollercoaster probably was not the best one to start off with, and I screamed so much the whole time. I wouldn’t say I enjoyed it, but the pride and accomplishment I felt when I got off made me feel as though it was worth it! I’m pleased to say that in addition to going on a few of the water rides (which were my favourite bits), I also made it onto Nemesis Inferno – which again, I didn’t particularly enjoy, but I still did it!

There’s more fears I’d like to conquer over the next few years – in particular I’d like to give blood and endure a long-haul flight. Flying is one thing, but being on a plane so long I’d be forced to use the toilet on there is another! What fears would you like to overcome?

And a final note, Happy Halloween!